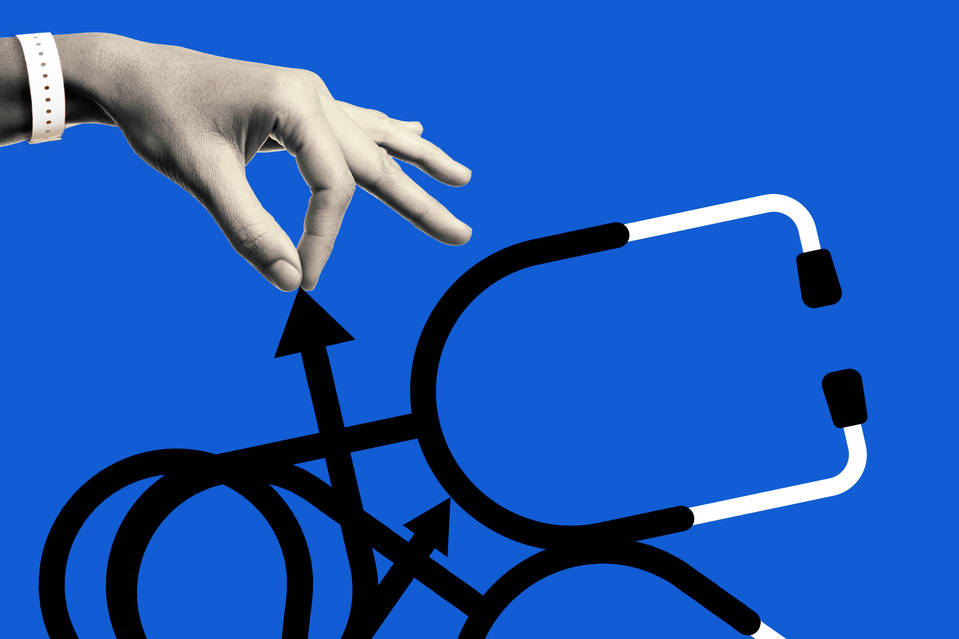 For years, patients have been hearing the same message from the health-care industry: Get involved.

They’re told they need to do more to monitor their chronic conditions. They are directed to be more active in deciding what treatments to have, or whether to treat a condition at all.

That has proved easier said than done. For some people, it’s a matter of feeling intimidated: Better to let the doctors decide. Some are overwhelmed by the choices they have to make about their care, which seem to get more complex every year. At the same time, many doctors are reluctant to change old ways of working.

Now researchers and health-care providers say they’re at last figuring out how to untie this doctor-knows-best knot and get patients to take charge of their own health. They’re designing decision aids, for instance, that walk patients through different options, translating complicated medical jargon and statistics about risk into simple language and visual aids. They’re offering patients full access to their own medical records, including their doctor’s notes about them. And they’re training doctors to help guide patients to make informed choices.

“There are many health conditions where there are multiple good options for treatment, and not a clear best option,” says Angie Fagerlin, chair of the department of population health sciences at the University of Utah, a research scientist at the Salt Lake City Veterans Affairs Medical Center and president of the Society for Medical Decision Making. “Shared decision making allows patients to engage in a deliberative, communicative process with their clinicians, and be active participants in their care.”

While data is limited on how shared decision making affects long-term health, studies do show that it leads to better outcomes, fewer invasive procedures and lower costs. What’s more, those who participate in health-care decisions with their doctor are less likely to regret the choices they make and more likely to stick to the treatment regimens they select.

According to a 2013 study in the journal Health Affairs, patients who were encouraged by health coaches to review options and get more involved in choices had 5.3% lower overall medical costs, 12.5% fewer hospital admissions and fewer elective surgeries.

Doctors also have new financial incentives to engage patients in decision making. In 2015, Medicare approved reimbursement for lung-cancer screening with a low-dose CT scan for certain at-risk patients—as long as they participate in a shared-decision counseling session first.

Here are three approaches that researchers are finding can make a big difference in helping make patients more confident about making decisions.

A clearer look at options

Decision aids, once limited to print pamphlets and brochures, now include interactive programs and videos that patients can view online. The aids walk patients through each option and its possible benefits and harms. Some ask about their health history.

A 2014 review in the journal Cochrane Reviews found that decision aids improve patients’ knowledge of their options, make them feel more informed and clear about what matters most to them, and lead them to participate more in decision making. The reviewers concluded that the aids reduce the number of people choosing elective surgery and have no apparent adverse effects on health outcomes or satisfaction.

From 2005 to 2015, Massachusetts General Hospital in Boston trained more than 900 clinicians and other staffers to use shared decision making with patients. A 2016 study of the program in Health Affairs found training sessions led to more than doubling the use of decision aids, and doctors reported that the aids improved the quality of their patient care and changed their discussions with patients. 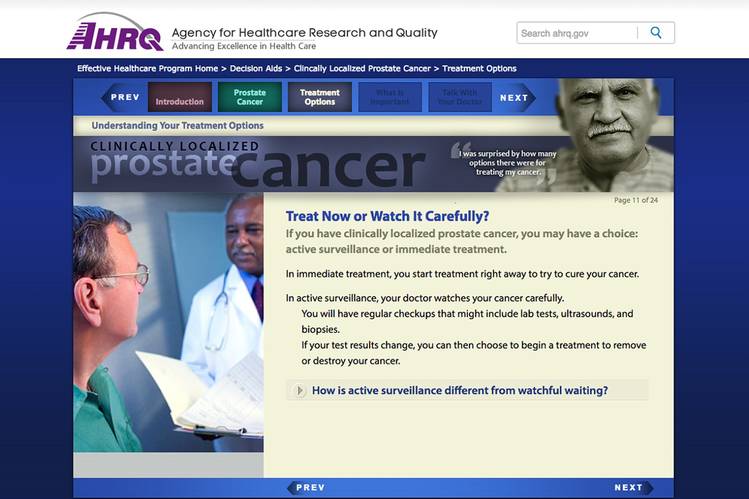 Decision aids like this interactive guide on prostate cancer walk patients through information about their conditions and set out their treatment options. PHOTO: AGENCY FOR HEALTHCARE RESEARCH AND QUALITY

Leigh Simmons, a co-author of the study and medical director of the hospital’s Health Decisions Sciences Center, says decision aids ensure that patients have all the information they need to make decisions such as whether to have a knee replacement. “We want to be operating on people who want surgery, not those who don’t know enough or aren’t ready,” she says.

If patients chose not to follow a doctor’s recommended course after a shared decision-making session, “as a physician I can rest assured I advised them that this is the recommended treatment, and they know what the risks and benefits are,” Dr. Simmons says.

One of Dr. Simmons’s patients, Harriett Broyles, 77, had her right knee replaced three years ago. She says she took a cursory look at a decision-aid booklet about treatment options beforehand, but chose to have the surgery mainly because she was in crippling pain and thought the surgery would yield quick results. However, she had a difficult rehabilitation. When her left knee began to trouble her last year, she reviewed an online video version of the decision aid more carefully. “The video answered a lot of questions I didn’t pay attention to the first time,” Ms. Broyles says. It helped her decide to forgo a second surgery, opting for physical therapy and cortisone shots.

Last year, Medicare announced that it will fund projects aimed at evaluating how best to integrate shared decision making into routine practice, focusing on treatment for conditions such as stable heart disease and localized prostate cancer. The shared-decision-making model calls for doctors to present options and outcomes tailored to each patient’s risk and, equally important, to help patients clarify their values and preferences.

In one study of 257 men in four Veterans Affairs medical centers led by Dr. Fagerlin and published last August in the journal Medical Decision Making, the treatment decisions patients made were based largely on urologists’ recommendations, which in turn were based on patient age and test results, and not on patients’ personal views of the pros and cons of treatment alternatives.

“A patient may tell his doctor, ‘I just got remarried, I’m 65 and the most important thing to me is to keep my potency,’ but then they chose the treatment with the highest likelihood of impotency because it is what the doctor recommended,” says Dr. Fagerlin, who has designed prostate-cancer decision aids for patients.

The most important goal, she says, is to avoid a situation “where the patient doesn’t have a voice or gets so overwhelmed by the decision that in the end they just say, ‘What should I do, doc?’ ”

Doctors are also improving the way they present complex medical information, which can be incomprehensible to less-numerate patients and befuddle even the most educated.

“Patients are often overwhelmed by massive amounts of data they now have access to,” says Brian J. Zikmund-Fisher, an associate professor in the department of health behavior and health education at the University of Michigan School of Public Health. “The easier we make it for them to understand, the more likely it is they will use it and the less time the doctor has to spend explaining it.”

Research has shown, for example, that patients have a better understanding of the size of a risk when presented with absolute risk (for instance, a five-year risk of cancer could be reduced from 4% to 2% by taking a drug) versus relative risk (the risk of cancer can be reduced by 50%).

Dr. Zikmund-Fisher and colleagues at the University of Michigan developed a web-based application that allows health-care providers and researchers to create graphics that use icons in arrays that show risk information in ways that make it easier for people to grasp the gist of it. Their research has found that presenting information about test results and treatment options in such formats can help patients understand the incremental benefits of risk-reducing treatments and the risk of developing side effects from medications. 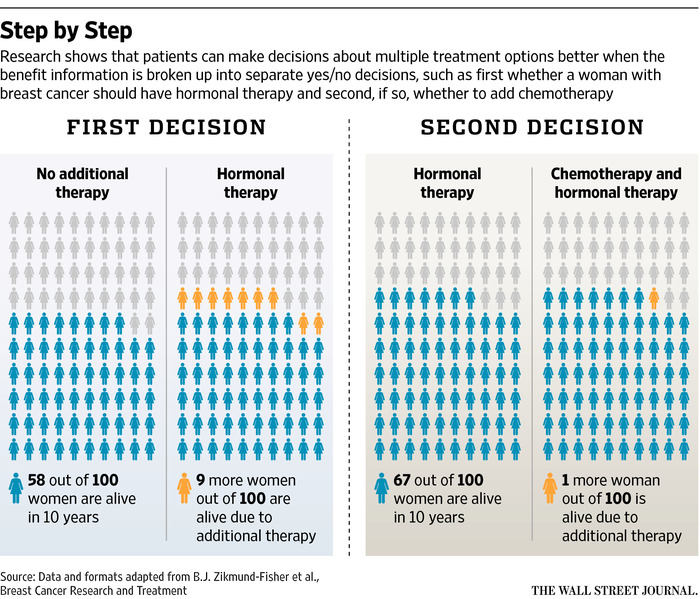 Research also suggests patients can be overwhelmed with too much information at once. For example, breast-cancer patients often have to decide between multiple therapy options to prevent cancer from coming back. In a study that surveyed 1,781 women, published in Breast Cancer Research and Treatment in 2011, half viewed displays that showed four possible treatment plans at once. The other half viewed the same information as two separate yes/no choices. Participants first chose between hormonal therapy and no therapy; those who chose hormonal therapy then considered the incremental effect of adding chemotherapy.

The study, led by Dr. Zikmund-Fisher, found that women who considered therapy options one at a time had significantly better comprehension of relevant risk information than those who had to consider all options at once.

With limited time to review treatment options and care recommendations during office visits, more physicians are using electronic medical records to help answer questions via secure email messaging, and provide direct access to test results. Some are allowing patients to view part of their medical record that has long been hidden to them—the notes that doctors, nurses and other clinicians write after a visit—using a model called OpenNotes developed at Beth Israel Deaconess Medical Center in Boston. The VA and 50 health systems in 35 states now share notes with about 12 million patients online.

OpenNotes co-founder Tom Delbanco, a primary-care physician at Beth Israel and professor at Harvard Medical School, says doctors are becoming more receptive “as research shows that access helps patients understand the importance of playing an active role in their own care.”

A trial of OpenNotes in 2010 found that two-thirds of patients who read their notes reported feeling more in control of their care, being more prepared for office visits and understanding their conditions better. A subsequent 2015 study at Geisinger Health System in Danville, Pa., one of three participants in the first study, found that patients were also more diligent about taking their high blood-pressure medication, suggesting that access to doctor’s notes may modify behavior in clinically valuable ways.

One concern has been whether doctors might have to dumb down their notes for patients, or whether patients might get too distressed by reading what their doctors say about them. Recommendations for doctors published in the American Journal of Medicine last year include avoiding jargon and medical abbreviations that might be misinterpreted—saying “short of breath” instead of “SOB,” for example—and using supportive language such as “the patient chose not to pursue treatment” rather than “the patient refused treatment.”

At UCHealth, based in Aurora, Colo., as soon as a doctor finishes signing a note, it is available to patients in their electronic record, according to CT Lin, chief medical information officer. Doctors are encouraged to use language such as “you and I have agreed that you will take these actions,” Dr. Lin says.

Bella Wong, 39, who had a double lung transplant four years ago at UCHealth’s University of Colorado Hospital, says online access to her own records and doctors’ notes has helped her become a more engaged patient than when she was first diagnosed with lung disease eight years ago and left decisions mostly to doctors.

Though she once viewed the word of doctors as “gospel,” she says of her relationship with them now, “I want to know everything that is available to me and understand all my options—you are not just telling me what to do, we are making a decision together.”

Ms. Landro, a former Wall Street Journal assistant managing editor, is the author of “Survivor: Taking Control of Your Fight Against Cancer.” She can be reached at[email protected].